The second Alice Jones mystery is out in two more weeks! I can hardly believe it. In anticipation, here is another look behind the scenes…

Alice Jones: The Ghost Light is set in an old, run down theater called the Beryl. The Beryl was once the finest theater in Philadelphia, but after a fire in 1927, it fell into ruin, got a reputation for being cursed and sat  derelict for almost a century. It’s an amazingly grand building beneath the years of soot and decay, full of drama and majesty. It’s also completely fake.

There are a lot of reasons I chose to create my own theater instead of using a real one, but the biggest was so that I could have total control of all the exits and entrances and any secret spaces that *might* exist.

But, the (fake) Beryl Theater was inspired by a very real one in the heart of Center City: The Boyd.

The Boyd from the balcony. Photo courtesy of Matt Lambros, After the Final Curtain.

My inspiration was twofold. First, The Boyd inspired the look of the Beryl. I love its art deco styling and the immense amount of detail everywhere in the building. I mean, it was a room for watching movies in the dark, but they still  intricately carved and painted the ceiling, and custom designed the carpets. Of course, the paint is peeling and there are chips in the moldings-but you can still see how amazing it was once upon a time. 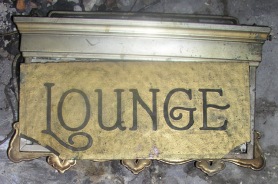 Stairs to the balcony, a sign for the lounge and detail etched into the lobby door. Photos courtesy of Friends of the Boyd, Inc.

But beyond just looks, I was inspired by the story of The Boyd and the people struggling to save it from demolition.

The exterior of the Boyd today.

Sadly, the auditorium wing of the Boyd was demolished in 2015. The facade and Grand Lobby, however, are still standing and The Friends of the Boyd are working to rehome many of the period features saved from inside the building.

The Beryl, I’m pleased to say, gets a happier ending.

Happy December. I can’t believe 2016 is almost over already!

Alice Jones: The Ghost Light is coming out next month (5 January!) and I thought it might be fun to ‘lift the curtain’ and share some of the things that inspired me while I was writing this mystery.

In her second case, Alice investigates a possible haunting at an old theater. While looking into the theater’s history, Alice discovers a fabulous diamond necklace went missing the same night a fire nearly destroyed the building. The necklace was called The Midnight Star, and it was never found.

I looked at a lot of pictures of famous necklaces while I was plotting The Ghost Light, but the second I saw The Patiala Necklace, I knew I’d found ‘the one’.

The Patiala Necklace was designed by Cartier for Maharajah Bhupinder Singh in 1928. It took three years and 2930 diamonds to create (962.25 carats of diamond!). The square yellow (tobacco colored for you fancy people) diamond pendant is the De Beers diamond and is the seventh largest diamond in the world.

It is a stunningly beautiful bib of jewels and I was entranced the moment I saw it. But, as I did more research, I discovered there was another reason to be inspired.

Like The Midnight Star in Alice Jones: The Ghost Light,  The Patiala Necklace mysteriously disappeared from the royal family’s treasury in 1948. No one knows who took the necklace (or if the family sold it off on the quiet), but it resurfaced in a second-hand jewelers in London in 1998. All of the large gems had been removed from their settings. Cartier bought the necklace and spent the next two years restoring it to its former glory.

Like Alice, I spend a lot of time wondering just where the Patiala Necklace WAS for all that time. And how did it come to be in that second hand jewelers? It makes me wonder about all the other missing treasures out in the world: Where are they hiding right now? And who will find them? Maybe, it will be me.